Zaragoza- From Hot to Hotter
40 degrees centigrade and going to get hotter! Well, what did we expect? We came to the northern hemisphere in part to avoid a southern hemisphere winter. But cheeeez this weather gives a man a thirst. It’s different to Oz – it starts to warm up here about 1pm and increases gradually to reach a peak during mid-evening. Fortunately we were taught survival skills years ago by my cousins José and Manny in Seville (where it is currently well over 40 degrees). In part, these survival skills have to do with the consumption of small, cold beers at any time of the day; watering down your chilled red wine with gassy, slightly sweetened water (Gaseosa); and having a good nap (siesta) after your early-afternoon meal – which will inevitably include wine. The Spanish are well used to these seasonably high temperatures and tend to simply avoid the hotter part of the day in favour of the cool of the late evenings. Going out for our morning coffee and a stroll this morning at 10am the streets were barren in the hub of this very large city; it has something to do with the locals taking advantage of the previous evening’s coolness.

Yesterday Rachel’s acute sense of detection for ye olde and ancient churches proved remarkable. The complete, tall front of a building we were passing was covered with hessian for restoration – a common sight hereabouts – and we were about to carry on when Rachel decided it warranted further investigation. We found an entrance and discovered it was indeed a church (another of those awesome and grand, cupolaed, beauteous-but-hideously decorated cathedral/basilica types) and inside was a congregation. But within minutes of our arrival a 38 piece choir paraded across the front (font?) and it was obvious we were going to witness a choral event that was not your ordinary Sunday choir. 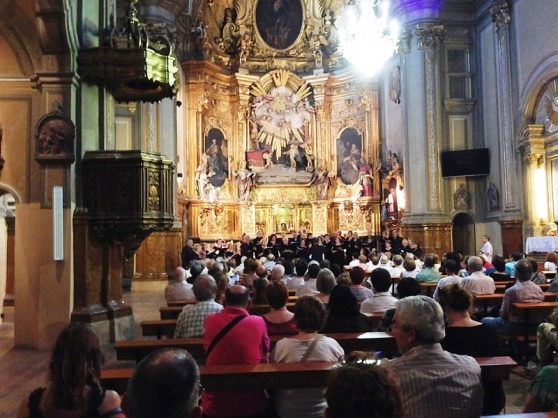 After quite a long preamble, little of which I understood except that there were going to be 4 pieces sung, the first in Spanish, the second in Italian, the third in French and the fourth again in Spanish, we were treated to a choral treat which was basically a cappella, the organ simply lending a key note for them to follow. It was another of those strange and interesting things that sometimes just happen when you are travelling. A spontaneous (and free) musical interaction in the cool of a monumentally spacious stone edifice which lifts ones day – there was much use of the iconic Spanish hand-fan by the ladies in the audience, as it was a hellishly hot.

From the city’s first name of Caesaraugusta, to the Moorish name of Saraqusta, to the Aragonese (Spanish) name of Zaragoza, the lingual corruptions give a clue to the long and varied history of this grand city along the Ebro River. Its base source of wealth has long been agriculture in the surrounding lands – now it is far more diverse and includes heavy industry on the outskirts. Currently, the locals use the many land-mark local cathedrals, mosques and basilicas as a tourist draw-card, and have developed their love of food into an art (not that this is specific to this particular region). It is, like many of Spain’s great cities, a foodie’s paradise. Not all people are well off, but man they know how to eat – and eat well. Great wines and great dishes have been developed here, along with inventive and delectable tapas.

Ah, what would the footpaths and laneways of Europe’s ancient and populous cities be without the breath-catching waft of sulphurous sewage as it drifts out of the drains at your passing feet, or the astringent smell of stale urine that greets you in the clefts of those narrow alleys; it is life – “but not as we (would like to?) know it”.

We have walked these streets and laneways up, down, sideways and backwards (the Ebro River is not something you would like to fall into), especially the Casco Viejo (old city) and local byways seeking out bars and restaurants olde and new, trying out their drinks, their tapas and, for our mid-day meal, their Menu Del Dia’s – an affordable way to have a substantial meal with accompanying drink. Every three or four hours we return to our apartment, saturated in perspiration, to freshen up and rest.

On our walks, apart from the many abundantly ornate churches which Rachel has been dragging me into for her photographic recording of their architectural and artistic opulence, we have discovered another aspect to the old city – its street art. Though the grand and skilful art works are signed we don’t know who the artists are or who funded them. They are often in areas that have become derelict, on walls in spaces created by the removal of old buildings. Irrespective of that they are often very creative, inventive and have clearly been painted by talented artists. 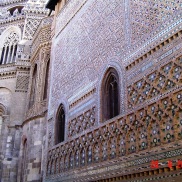 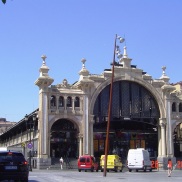 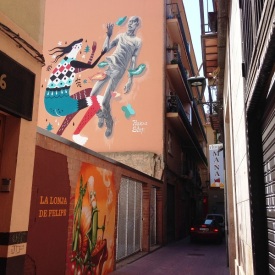 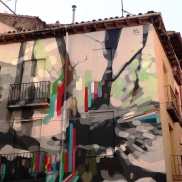 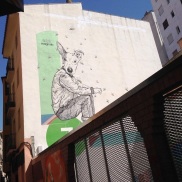 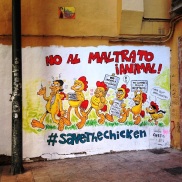 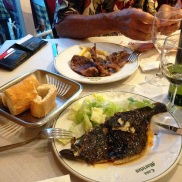 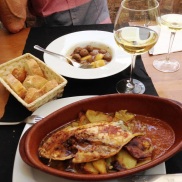 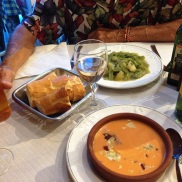 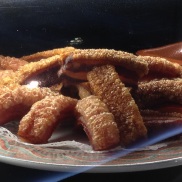 Electric Scooters are very popular in Sicily as are electric bikes, though not so in Spain it seems. The electric scooters are a great concept, especially around the Mediterranean where electricity is more likely to be produced by wind or solar farms. They produce no noxious emissions and are incredibly silent. So silent, in fact, that you don’t hear them coming as you step out onto the road and . . . . . aargh !! 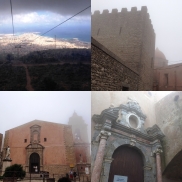 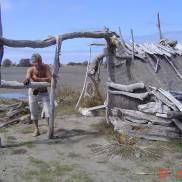 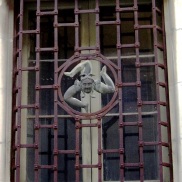 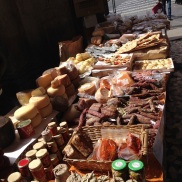 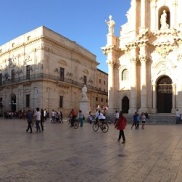 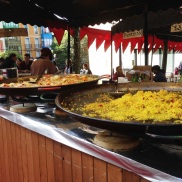